How did it happen? 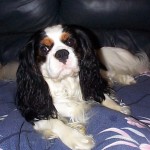 One of the most puzzling things to Cavalier breeders is how the neurological disease syringomyelia ( SM ) suddenly seems to have become so widespread in the breed?
There were apparently Cavaliers back in the 60s and 70s that scratched when a collar was put on their neck or bunny hopped when walking on a lead, but  screaming, yelping dogs were never reported. Puppies and young Cavaliers needing serious brain surgery or being put to sleep because of uncontrolled pain were unknown.
So, how did we go from a few scratching dogs way back then to the situation now, where more than 50% of Cavaliers, without any obvious symptoms, are found to have pockets of fluid in their spinal cords when screened to see if they are suitable for breeding?
We are not talking old Cavaliers who are victims of a degenerative condition, we are talking about breeding dogs, the majority 2.5 years or younger. Indeed the results from the scans done on older Cavaliers through the pet owner initiative ‘Ruperts Fund’, suggest that the previous generations have more chance of being unaffected.
Omerta: The Breeders’ Code of Silence, an excellent article by Sierra Milton talks about the refusal by breeders to share health information  and goes on to say:-
“Even more dangerous than the Code of Silence though is the refusal to contemplate defective genes may exist within a breeding program and be present for generations, quietly meshing through many bloodlines before manifesting itself. Could it be possible that dogs which appear healthy can actually be spreading dangerous, sometimes lethal genes throughout the breed community until finally two healthy, but gene-defective carriers combine to produce that first tell-tale affected offspring?

Of course it is and time and again the geneticists tell us how this is possible.”

It is difficult for anyone who has not lived with a SM affected dog to realise just what a difficult and distressing condition it can be for dog and owner. There may be small hobby breeders that genuinely have not seen a badly affected Cavalier ( although they are unlikely to remain that lucky if they stay in the breed for much longer ) There may be show breeders that have not had a badly affected Cavalier in their kennel, although that is perhaps because they sell or rehome all dogs that show any signs of poor gait or sensitivity to touch.
If we are forced to wait for all serious breeders to experience life with a dog whose pain is difficult to control before they admit that the situation must be addressed,  then it will be too late. It may well be so already.
The usual excuses trotted out about puppy farmers have no place in the effort to give this breed a healthier future. There are enough breeders who are members of cavalier breed clubs to make it possible to breed away from this condition and create a nucleus of Cavaliers that remain unaffected by SM into old age.
Continuing to breed young dogs, unscanned dogs, affected dogs is scandalous, especially when such breeding is sometimes carried out by those with the most influential positions within breed clubs.
The following paragraph from the article ‘The Biggest Problem’ by C.A. Sharp  describes these people well:-
“The Incorrigibles
You all know them. The ones who put winning above all other goals. “It doesn’t matter as long as the dog wins”, is their mantra. Their dogs must win, as must their dogs’ offspring, and woe betide anyone who stands in their way as they pursue greater breed – and personal – glory.”
This entry was posted in SM. Bookmark the permalink.